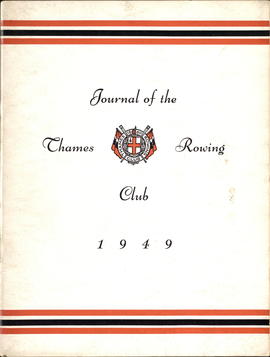 Journal of the Thames Rowing Club 1949

"Peter Crichton Kirkpatrick was an oarsman of immense stature who brought wry humour to the towpath through a long life which began on August 24 1916 and lasted until he died in his sleep on October 5, aged 79. Son of a GWR engineer and grandson of Sir William Perkin who practically invented the British dyestuffs industry, he was educated at Monkton Combe and Queens' College Cambridge before going to work as a chemist for ICI's dyestuffs division in 1937. After war service in Italy and Greece with the Manchester Regiment and the Yorks and Lancs Regiment, and the eventual rank of major, he returned to ICI and took up the oar again for Thames Rowing Club and for Britain. He was also familiar with less grand byways of rowing, having competed for the Salford club Agecroft on the Irwell.

In 1967 Peter switched careers to do marketing for the General Post Office, eventually becoming a consultant to BT for long past his retirement. He was a passionate supporter of Thames and GB crews, appearing on the bank at international regattas and world championships whenever he could, raising a pint at their successes and an eyebrow at their cock-ups.

His sharp observations, as much on society or politics as on rowing, were delivered in perfectly-timed one-liners. It was Peter who likened the refurbished Remenham Club to a Tesco, and Peter who, regretting that every leaf of countryside on Henley's Bucks bank was obscured by tentloads of suits 'sponsored as newts' during the boom eighties, remarked that if alcohol were banned the regatta would collapse, but if rowing were banned nobody would spot the difference. Happily recession restored some countryside at Henley for Peter's last few visits. An imposing physical giant, he had a gentle nature which belied one of the toughest strokes of his generation."
...
"The death of Peter Kirkpatrick at the age of 79 robs the rowing world, and Thames Rowing Club in particular, of one of the most distinguished oarsmen of the immediate post-war period. Peter rowed for Monkton Combe in the Ladies' Plate at Henley in 1934 and 1935, reaching the semi-finals in the former year. He rowed for Thames in the Thames Cup in 1937, for Queens' College, Cambridge, in the Ladies' in 1938, and for Thames again in the Grand in 1939, but without success. In 1936 he had won a Trial Cap at Cambridge as a Freshman and many thought he was unlucky not to win a Blue.

After war service he began an outstanding period with Thames. A tall, powerful heavyweight, he stroked the winning Stewards' Cup four at Henley in 1947, with Hank Rushmere at three. That year, the four and the Thames Goblets pair, ðSparrow' Morris and Alan Burrough, became the first British entries for the European Championships, but neither reached the finals.

In 1948, Peter rowed six in the Thames eight that won the Head of the River Race. He then went on to stroke Thames to win the Grand at Henley, and he also stroked the winning Stewards' four again that year. Regarded by many as an outstanding crew, the four represented Great Britain in the 1948 Olympics at Henley but they went stale and, rowing well below their true form, failed to reach the final. The following year, with Kirkpatrick again stroking, Thames reached the final of the Grand but lost to Leander. A composite eight, drawn from these two crews, represented England in 1950 in New Zealand in what were then known as the Empire Games, but after a series of misfortunes they could finish only third, to take the bronze medal. In 1951, Peter stroked Thames for his third and final Stewards' win. In all these crews, Hank Rushmere rowed behind Peter and the two remained firm friends for the rest of Peter's life.

He became an occasional coach for Thames after retiring from active competition and took an active part in the club's administration. He was captain in 1950 and was elected a vice president in 1969. A keen, if critical, supporter of rowing, he could usually be found on the Remenham mound during Henley training with his old friend Ramsay Murray, who died last year. A frequent spectator at Lucerne and World Championships, his presence and strong personality will be much missed by a host of his rowing friends."

Dr Kenneth Alan Williams, known to all as Bill, was born in Brentford and educated at Mercers School and Chelsea Polytechnic. He passed the ARIC (Associate Royal Institute of Chemistry) examinations in 1923 and gained full BSc Honours in 1926. He was an analytical chemist, specialising in edible fats and oils. He was President of the Society for Analytical Chemistry in 1955-6.

He did a great deal of research into the history of Thames Rowing Club and indeed Geoffrey Page acknowledges that the early sections of 'Hear The Boat Sing' draw extensively on his work.

The 1949 Journal contains the following obituary:

"We regret to report the death of Charles Morrell, suddenly, on the 12th December while in Holland. He was present at the Club's Annual Dinner on the 10th December when he was in good form. Morrell was elected a member of the Club in 1912 and latterly took up life membership.

A member of the Artists' Rifles on the outbreak of the first Great War he gained a Commission in the The Munster Fusiliers but later transferred to The Flying Corps as an observer. He was shot down during an operation and interned in Holland and then began his long association with the Netherlands and her Far Eastern Colonies.
On the cessation of hostilities he returned to England and resumed his activities with the Club and in 1920 was 7 in the 2nd Thames Cup Eights at Henley.

He went to Batavia, Java, on business in about 1922. He rowed 3 in the first all British four to win the Senior Fours Trophy in the Soerabaia Rowing Club's Regatta of 1923. He was of the number of keen Dutch and British who formed the Batavia Rowing Club. During spells of work in London he rowed frequently for the Club, at Henley in 1920 as noted above; bow of the Grand crew of 1921 and 4 in the Thames Cup crew of 1924. He was Manager to the Rowing Team in the 1936 Olympic Games.

During the late hostilities he obtained a Commission in the R.N.V.R. and was assistant to the Naval Attaché at the British Embassy at The Hague. He was an Officer in the Order of Oranje Nassau. It should be noted he was fluent in the Dutch and French languages. After Holland was overrun he was posted to the Foreign Navies Department at the Admiralty.

About two years ago he complained of heart trouble but of late seemed to have made a good recovery and was from time to time seen in 'Old Mens' Fours. A popular figure in the Club, great sympathy win be felt for Mrs. Morrell and the two children."

Ian Fairbairn was the son of Steve Fairbairn and his wife Eleanor née Sharwood. He was educated at Eton, and then attended Royal Military College Sandhurst, and was commissioned as a second lieutenant in the Royal Horse Guards on 11 November 1914. He was not posted to France on 19 May 1915, having just been promoted to lieutenant on 14 May. He transferred to the Guards Machine Gun Regiment on 12 August 1918, and was promoted captain on 18 October 1918. He ceased to be employed with the Guards Machine Gun Regiment on 31 January 1919, and resigned his commission on 1 May 1919. He was badly wounded during the war.

He was the Unionist candidate for Burnley (his first father-in-law's old constituency) in the 1924 and 1929 general elections; on both occasions he came second behind Labour's Arthur Henderson.

In 1920 he was runner up in Silver Goblets at Henley Royal Regatta in a coxless pair with Bruce Logan. In 1923 Fairbairn stroked the Thames crew which won the Grand Challenge Cup, and was again stroke in the Thames crew that made up the eight rowing for Great Britain at the 1924 Summer Olympics, finishing fourth. He was Captain of Thames in 1933, a Vice President from 1927–67 and President from 1967 until his death a year later. He was a Steward of Henley Royal Regatta from 1948 until his death.

Fairbairn pioneered the unit trust industry at M&G Investments which he joined in 1931. He believed that investments in equities should be available to everyone so that there was a wider ownership of stakes in the nation's economy.

He married Cynthia Isabelle Theresa Arbuthnot, daughter of Gerald Arbuthnot MP for Burnley on 27 July 1925. They had two children and were divorced in 1941 and he married a second time in 1941 to Esmée V. H. Bethell. She was killed by a V-1 flying bomb in 1944. Fairbairn appears to have held a reserve commission during the Second World War, but it is not clear if he saw any service. From 1943 he was chairman of M&G.

In 1955 he became chairman of the parent group White Drummond. In 1961 created the Esmée Fairbairn Charitable Trust as a memorial to his second wife, transferring his personal holding in White Drummond to the trust – through this investment it became one of the largest charities in the UK.